ALL your E model questions, technical and otherwise answered

What mileage is an engine assumed to be run in?

Life is far too short

I thought it was normally 1000 miles so yours should be well run in now.

The older i get the faster i was
Top

I would love to see it from your point of view officer, but i can't get my head so far up my ass
Top

I wouldn't worry too much about running your engine in. Just drive with a smooth throttle and don't load the engine in a high gear with low revs. It's much better to rev a little with a slow throttle opening.
Just got back from a Triumph Factory visit. (no i'm not thinking of changing, just curious)
They wheel their bikes straight off the assembly line and straight into the dyno. (every bike) I take it Kawasaki do this as well, I know Ducati do.
They are revved out to see if max horse power falls within a certain tolerance. If ok then oil is drained out then straight into a packing case and shipped to you.
Your pride and joy has already been to max revs and back. 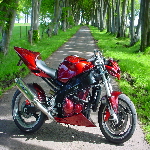 they were probably doing you a great favour buy revving it so hard.

"The biggest factor is that engine manufacturers now use a much finer honing pattern in the cylinders than they once did. This in turn changes the break-in requirements, because as you're about to learn, the window of opportunity for achieving an exceptional ring seal is much smaller with
newer engines than it was with the older "rough honed" engines.

In addition, there is a lot less heat build up in the cylinders from ring friction
due to the finer honing pattern used in modern engines.

The other factors that have changed are the vastly improved metal casting and machining
technologies which are now used. This means that the "wearing in" of the new parts
involves significantly less friction and actual wear than it did in the distant past."

For the rest of this article try here.

My reasons for the question is that in cars they seem to become efficient mpg wise at around 10,000 miles is it the same for bikes?

Life is far too short

or maybe your just riding slower now your getting older

How did you know I am old?